Hong Kong comprises of Hong Kong Island, Kowloon, the New Territories, and numerous other small islands. With a population of just over 7 million, it is one of the world’s most populated areas.

Due to its position, it is a frequent layover and is one of the most visited destinations with up to 30 million visitors per year. Hong Kong International Airport has one of the biggest passenger terminals in the world, and was, in fact, the largest when it was completed in 1998. The Hong Kong express train takes approximately twenty five minutes and costs around 10 GBP to get into town.   From there, you can use the Mass Transit Railway (MTR) to get to up to 60 destinations.  The service is clean, efficient and safe, and Hong Kongers boast that it takes only five minutes to get anywhere on it and if you fall asleep at 4am in the morning on it, you would not be robbed.

Actually, you will observe many people napping in public in Hong Kong, the pace of life is fast and many people have more than one job as the cost of living is high. The weather can be hot and humid too and so the best of time to visit is November and December when the humidity is at its lowest and the skies are clear.  When the weather is hot, you could be well-advised to pop into one of Hong Kong’s several tea restaurants for a lemonade over a pickled kumquat, or pop into a Hui Lau Shan café which specialise in mango dishes where you could order a frozen mango with coconut milk ice cream to cool you down.

Central is the main CBD and here you will find the high-end hotels such as the Manadrin Oriental, Shangri-La, and the Four Seasons on Finance Street. Here you will also find the shopping malls and luxury boutiques such as Louis Vuitton. There are many serviced offices to rent here, for instance on Queens Road, both numbers 30 and 100 provide flexible office space.  Locals will argue that Mak An Kee make the best noodles in Central District and the thin egg noodles with prawn filled wan tons in a rich broth are a favourite dish.  The New Discovery bar in Central on the waterfront is a great spot to wind down with a beer at the end of the day.

Kowloon, named after nine dragons, was once a walled, ungoverned city, and is still a slightly grittier part of town. It has a lower skyline than Central and has less-expensive office space such as that in the International Commerce Centre, just off Nga Cheung Road.  The office rents are approximately half that of Central, which is just a short ferry ride away.

More detail commerce data can be sourced on the dedicated section on the Hong Kong Government website here.

Hong Kong is famous for its tailors and some of its finest are based in the Tsim Sha Tsui area of Kowloon. Here you will find Simpson Sin Tailor who will have a bespoke made suit made up, with two fittings, in less than 24 hours, all for less than £300.  They will also keep your patterns on file for your next trip.

In Mong Kok in Kowloon, you will find Tim Ho Wan dim sum restaurant which is the cheapest restaurant in the world to have a Michelin star – pork dumplings will cost you the equivalent of just £1, however, you will have to queue half an hour to get in.

Locating a new office in Hong Kong can be a challenge for most organisations, especially with the language and cultural barriers.

An example of a quality office space in Hong Kong has been added below: 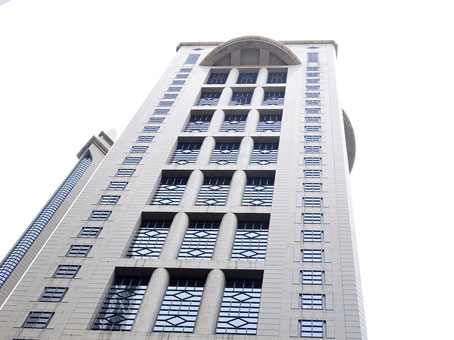 Image supplied by The Office Providers

If you can’t wait that long and fancy cooking for yourself, you could head to the restaurant utilities District which is two stops away from Tsim Sha Tsiu on the MTR, to buy a world-class chefs knife. Its official name is Yau Ma Tei, which translates to sesame fields, and is in the south western zone of Kowloon.

It is worth noting some of the Chinese traditions whilst visiting and working in Hong Kong, for instance; pointing with one finger is considered rude, therefore pointing with all fingers together is a gesture most commonly used. To summon somebody with a finger is also considered rude – you should hold your palm down and move your fingers back towards you.  If you would like to refuse something, such as an item from a street seller, it is more meaningful to shake your hand rather than your head.  It is also disrespectful to stick your chopsticks into a bowl of rice, or to play with your chopsticks too.

There are several tourist activities to take part in in Hong Kong, such as taking the Star Ferry across the harbour or taking a tram up The Peak to enjoy the scenery. Lan Kwai Fong in Central has plenty of bars, clubs, and snooker clubs too such as Racks Bar, on the seventh floor of the M88 building.

Over the water and a little higher up than Racks Bar is Ozone Bar, this is on the 188th floor of Kowloon Ritz Carlton –here you can enjoy cocktails and tapas, and take in the incredible views of Victoria Harbour and the rest of Hong Kong.

Are Bookmakers allowed to be Casinos?